“It’s not about the faces on the stage, but the One who’s truly famous.”

So says the opening promo line on the Passion 2010 website highlighting the speakers for this years conference.  The leaders of the Passion conference say, convincingly I might add, that their aim is to, “see a generation stake their lives on what matters most.”  Praise God for such a vision!  And praise God for the organizers of this event.  Praise God for the godly men (and couple of women) who are listed as “leaders” for the event.  Now, can we just be a little bit more honest about “the generation” and about those “faces on the stage?” 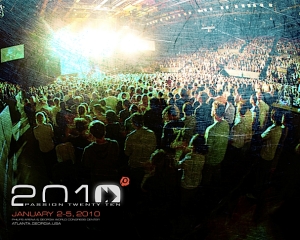 The generation the leaders of Passion are aiming to see stake their lives are suburban, upper middle class, overwhelmingly White evangelical kids.  Everything about the conference and the conference website is geared towards that demographic and though they may tout international credentials, this is far from an international conference.  These same kids will worship in much they same style they would at a secular rock concert though to Christian music.  They will surge and sing.  They will cry and commit.  And they will hear from speakers who look and sound just like them (with the noted exception of Francis Chan — and the word is still out on whether he’s a sellout or not).

The faces on the stage matter.  If they didn’t matter the organizers of Passion would not have rounded up the likes of John Piper, Louis Giglio, or the David Crowder band.  These folks are some of the superstars of the evangelical church world, and if we could be honest, they are the reason why many of the folks signing up for Passion are signing up.

They matter for the same reason the Deadly Viper’s controversy was indeed a real controversy.  It is not without significance that Deadly Vipers was initially introduced during a Catalyst conference (at least I think it was).  The stunning ignorance (and quite ready repentance) of the authors of Deadly Vipers and of Zondervan is not theirs alone.  The evangelical community within the United States over and again continues to demonstrate a tone deaf ignorance bordering on stubborn hard heartedness when it comes to issues of race and ethnicity.

Why is Passion able to say without apparent irony that the faces on the stage don’t matter in a world where the fabric of evangelicalism even within the United States is incredibly diverse?  Why did Zondervan stick their foot in the crap pile again after only a few years ago Lifeway was smacked down for producing other racial insensitive material?  Why is any of this news to the large number of White evangelicals who honestly and with sincerity desire to work to proclaim the gospel effectively to all people?

Because White evangelicals live socially, economically, and indeed theologically in a world untouched by other perspectives and increasingly are seeking to isolate themselves further by developing specialized ministries that cater only to themselves.  Call it FUBU for White people.

The truth is, the faces do matter.  And my White evangelical brothers under the skin had better be aware that it matters more than they think.  Every ethnic minority living under a dominant culture knows that it matters.  Think I’m wrong?  Spend any length of time in a foreign country and you’ll discover quickly just how welcome an American accent can be, or better yet join a church of a very different ethnicity than your own and immerse yourself.  You’ll quickly discover that it matters a lot more than you think to have someone who looks like you, who can at some level identify with your experience, and who can articulate in a culturally relevant way those things that matter most, is very important.  Call it the incarnation experience.  You see, none of us have a high priest who cannot be touched with the feeling of our infirmities.  That is to say, Jesus knows well what it is to enter fully into the human experience and thus sympathizes with us in our own.

It is time for mistakes such as those embodied in Deadly Vipers and Rickshaw Rally to come to an end, and the Christian community ought to be the leaders in this effort.