I cannot now remember exactly when or how it happened, and thus it is difficult to describe with any lucidity. But, I do remember that it happened or rather, did not happen.  That is, I did NOT give up my confident belief in the reality of God. But I almost did.

As I said, I cannot quite remember the details so my description may be less than helpful for some.  I hesitated for long to write about it publicly, though I did reference the experience once in a sermon I preached. I do know that it was not precipitated by any particular event or culmination of events.  There was no great crisis, no singular moment of peril where I questioned God and all the things I had been taught, believed, and taught others.

As I recall it now, I read a book. It was not a refutation of Christianity or anything like that, no.  It was a book about people who have walked away from their faith.  It was not especially well written or compelling and there were no arguments presented that were persuasive. It was mostly stories. Narrations of people who had been Christians and now no longer were.

Somehow it shook me.

Fear began to creep into my soul and I found it difficult to sleep well at night. I began wondering, ‘Will I too abandon my faith? Is there no God? Why do I persist in believing?’ It did not help that I was, and had been, in a very long dry season of faith.  My prayers, feeble and infrequent as they were, felt as if they reached no further than the ceiling, if that. Worship was dull and uninspiring. Bible reading – boring. There was so little there at all. A deep dryness had overtaken me, such that walking away would not have entailed much change, if any, in my daily habits and routines.

True, I would have lost my job in ministry and would have my Sundays free. There would have been tremendous disruption to the network of family relations and friendships.  It would have been isolating. But that is not what prevented me from walking away, though if I am honest, those considerations did enter in. And it does not really bother me that they did. I do not lack the courage of my convictions to face things honestly and only maintain a façade of faith for social reasons, which would have been the easiest thing. Not at all.

And it was not that I was afraid to face the arguments against theism – though I didn’t read them at that time. I did not need to read them, nor did I need to read defences of theism.  I knew, intuitively, that what I was going through was not about such arguments. I knew that they would not be persuasive one way or another. Besides, I had read them  before and knew (more or less) what they were all about.

There was one thing that restrained me however; one ‘argument’ that I found compelling – though not at the level of my intellect.

I call it the argument of humility, though perhaps that is a poor choice of words. Ultimately I could not walk away because I was burdened by the weight of mystery … the weight of history … the weight of, well, of experienced reality. And not only my reality, but the reality of tens of millions, of billions of others around the world historically and even now. There was something that would not allow me, though I had every reason to. I could not believe, yet, I could not NOT believe too.

So I allowed myself. I read no books in defence of faith. I did not aim to pray or study or meditate more. My prayers, feeble and infrequent, continue to bounce off the ceiling. I continued to be dry.  I simply allowed myself to drift on the current of faith (if you can call it that, as it felt like anything but), and at some point I cannot now recall, the moment ended – the crisis, as it were, subsided.  And I was left with God.

Today I will not wash clothes. Tomorrow, perhaps, I will. 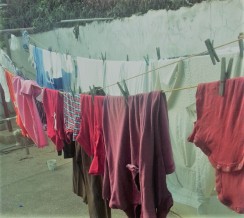 Here, washing is done on hand. Of course, some people do have washing machines, but we don’t.  We wash on hand, like most people.

What that means is buckets of water, washing soap, and time. Wash, wash, rinse, rinse, hang to dry. And sometime rushing out to gather the clothes from the drying line before a sudden rainstorm hits.

My wife hates washing clothes. It is tiring and dull and not so gentle on the hands.  Me? I don’t mind it so much. Except washing towels and jeans. That is no fun.

But I will not wash today. Tomorrow, perhaps, I will.

I have recently joined, if one can call it that, a writer’s guild. It is rather an exalted title for what, in reality, is an eclectic collection of people on Facebook who have agreed to write, to

encourage one another in our writing, and to respond with helpful critique to the writings that we offer.  For some it is a spur to greater creative activity. For me, it is a discipline I’ve chosen to impose upon myself.

Writing, you see, is not something that comes especially difficult for me. I don’t usually struggle to write,  that is, when I decide to write.  That decision point is really the challenge.

Give me a topic, any topic, and I can throw together words about it that are coherent and at least mildly entertaining, or at least not devastatingly dull.  Call it a gift, the gift of gab, or of know-it-all-ism, I am unsure which would be the better moniker for it. I am sure that I have it.

What I lack, however, is the discipline.  The iron will to write something whether I feel to write or not. To compose even on those days and in those moments when I would rather do something else.

Nevertheless, I have committed myself. Perhaps this commitment will aide me.  Perhaps it will stir me from the haze of complacent over-thinking of every post and enjoin me to simply write whatever the result may be – whether good or bad.